All about VFX and CGI software (and more).

MAXXON: Exclusively for ZBrush Perpetual License Holders. Because We Care

As one of millions of ZBrush perpetual license holders, today I received this gem of an offer from Maxxon: 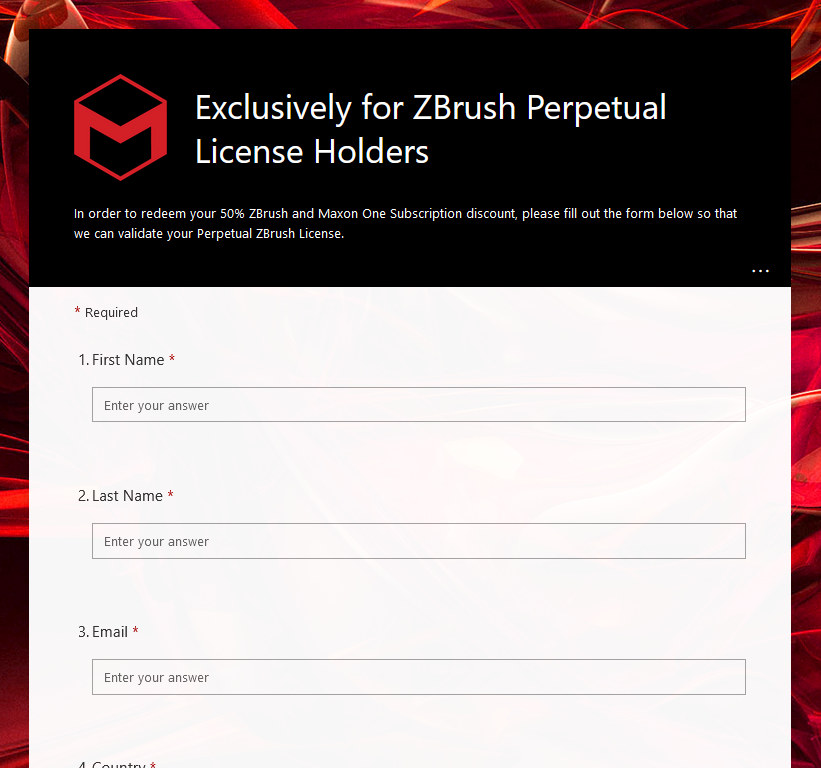 With the following decription:

ZBrush has always stood for innovation and artistic empowerment. That is a philosophy that is shared by the Maxon creative community. We believe in empowering artists any way we can to help expand your capabilities and offer more to your clients. We are confident that having complete access to all Maxon tools, services and training will help you achieve your goals.

Just another bunch of corporate mumbo-jumbo with a poorly concealed attempt at selling a subscription to a perpetual license holder. Classic.

"...We are confident that having complete access to all Maxon tools, services and training will help you achieve your goals."

Allow me to fill in the blanks in this marketing pitch.

Buy That Zbrush License Before It’s Too Late!

MAXON is about to acquire Pixologic!

If you were hesitant about purchasing that perpetual ZBrush license, YOU HAVE TO DO IT ASAP before they make it subscription-only, just like they did with Redshift Renderer!

It just keeps getting better, doesn't it?

Backup and Restore a Live Linux System Using Snapshots. How to Install Linux Mint 20 on an LVM Partition

In my previous post on the topic of Backup and Restore I mostly focused on Windows use cases and only briefly touched upon backing up Linux and MacOS systems. This is because Windows users have access to the amazing file system snapshotting capabilities in the form of Volume Shadow Copy “by default”. As for MacOS – it comes bundled with its own backup management suite called Time Machine, so backups are possible out of the box in there as well.

As for Linux folk... It’s a bit more involved, but still perfectly possible to backup systems without any downtime. And to do this one would need to make sure their system is running off an LVM system partition.

If you have no idea what LVM stands for (spoiler: it’s “Logical Volume Management”), I would suggest you first get up to speed with what LVM is and why one would want to use an LVM partition for system storage rather than a standard EXT4/XFS one.

Either way, if you want to have an ability to backup a live Linux system (like an "always on" server or a hypervisor), you need to make sure the OS is installed onto an LVM-enabled volume, which supports creation of Snapshots. In this example we’ll set up an installation for a system with an EFI System Partition for boot-loader management. If you’re planning to go with a legacy BIOS boot instead, just skip the EFI partition creation step. The process is very straightforward and only takes minutes to complete.

Linux Mint is my long-standing favorite among all distros, so I will be using it to guide you through the process. But the steps described here should be more or less identical for the majority of Linux distributions, especially Ubuntu Linux derivatives, which Mint certainly is. I will also assume you have basic understanding of Linux, storage systems and disk partitioning, otherwise you should certainly not follow the guide and get some more experience first.

And I bet you do too.

You probably also use your computers on a daily basis. Those are cool. But sometimes they crash or glitch. Get stolen or hacked. Or install Windows 10 updates. Or die in a fire.

Together with all your files and memories.

Consequently, today I'd like to direct your attention to the topic of data backup.

Still, part of getting any work done on a computer is making sure your files don't accidentally get lost. Whether you like it or not, unless you have someone else responsible for keeping your data safe, you should adhere to a certain form of a backup strategy on your own.

Unfortunately, lots of people overlook this topic, and end up losing sizable amounts of their labor.

If any of this sounds familiar, this post will present a couple of suggestions and tools. And most of those won't cost you a dime.

Otherwise, if you are already using some form of a backup solution to manage redundant copies of the files you're working on, you probably won't discover anything particularly new here.

This article is not meant as an all-encompassing guide, but rather a brief introduction. One without product placements, affiliate links or hidden ads. Just honest opinions based on personal knowledge and experience.

My fellow pro and hobbyist video editors and geeks alike, our prayers have been heard!

Do you remember finding yourself in a situation where you needed to simply edit a couple of clips together regardless of the format they were in? And maybe add a soundtrack, a title or two along the way, as well as do some basic color correction or time warping on the source material?

Here's how it usually goes: you get an idea, either write it down or jump straight into your NLE and get ready to bring it to life.

But then you must be sure to have a full-fledged video editing app on the computer you have access to. And even if you do say, open up your Premiere, Final Cut or DaVinci Resolve, you'll quickly realize that professional NLEs are picky about the formats you need to provide your videos in. Then you find out that you need to transcode a clip or two, save some images in another format...

Now you're questioning this sudden wave of euphoria which came with the idea, and looking for reasons not to keep going and finally...

Nope. Not worth it. I'm outta here!

And that, my friends, is exactly how ideas DIE...

Quietly... In the corners of your mind... Overtaken by a barrage of complications and tedious procedures needed before you can actually get to working on the damn clip.