In my previous post on the topic of Backup and Restore I mostly focused on Windows use cases and only briefly touched upon backing up Linux and MacOS systems. This is because Windows users have access to the amazing file system snapshotting capabilities in the form of Volume Shadow Copy “by default”. As for MacOS – it comes bundled with its own backup management suite called Time Machine, so backups are possible out of the box in there as well.

As for Linux folk... It’s a bit more involved, but still perfectly possible to backup systems without any downtime. And to do this one would need to make sure their system is running off an LVM system partition.

If you have no idea what LVM stands for (spoiler: it’s “Logical Volume Management”), I would suggest you first get up to speed with what LVM is and why one would want to use an LVM partition for system storage rather than a standard EXT4/XFS one.

Either way, if you want to have an ability to backup a live Linux system (like an "always on" server or a hypervisor), you need to make sure the OS is installed onto an LVM-enabled volume, which supports creation of Snapshots. In this example we’ll set up an installation for a system with an EFI System Partition for boot-loader management. If you’re planning to go with a legacy BIOS boot instead, just skip the EFI partition creation step. The process is very straightforward and only takes minutes to complete.

Linux Mint is my long-standing favorite among all distros, so I will be using it to guide you through the process. But the steps described here should be more or less identical for the majority of Linux distributions, especially Ubuntu Linux derivatives, which Mint certainly is. I will also assume you have basic understanding of Linux, storage systems and disk partitioning, otherwise you should certainly not follow the guide and get some more experience first.

Why Not Use The Default LVM Installer Option?

Linux Mint installer provides an Advanced option of installing the OS onto an automatically set-up LVM volume. This is quite convenient. Except… It doesn't give the user any ways to customize the configuration of the volume group. 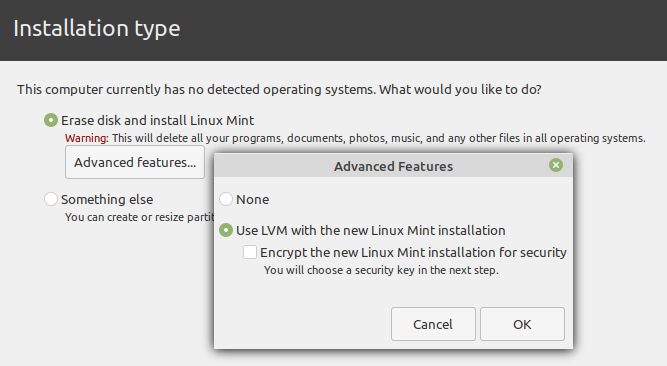 The main difference between Microsoft Volume Shadow Copy and LVM when it comes to creating snapshots is that VSC can utilize free space on any NTFS volume to store changing data when creating a "state in time snapshot", whereas in case of LVM the volume group needs to have some unused space available. This makes LVM quite a bit less flexible compared to VSC, so it's the users' job to make sure they leave some space available in the volume group, while making an "educated guess" on how much of the free space to actually reserve for the snapshotting tasks.

Sure, one can always try and resize the created logical partitions afterwards to make up more space for the snapshots and the swap area by taking it away from the root/home partitions. For that you would use the "--resizefs" parameter, which resizes underlying filesystem together with the logical volume, regardless of whether you are extending or shrinking the partition. However, not only would you need to perform this procedure externally, from another OS or by loading up a LiveCD, since you can't resize a system partition from the OS itself, another issue is that reducing existing partitions always comes with a fair bit of risk of data loss.

So after the "default" LVM installation you end up with something like this:

The installer only left poultry 48 MB of free space in the volume group! This will most certainly cause serious issues when the time comes to create snapshots of the whole system for making backups.

Clearly, default LVM install is not the best way to go. So I personally don't recommend using this option and instead urge you to go with the manual way of setting up your LVM groups since it takes mere minutes. But it provides so much more control. I promise this process is simple. Trivial even!

Don't believe me? Check this out:

This is what you will end up with after all of the steps are done:

Start the installer and on the “Installation type” screen go with “Something else”. 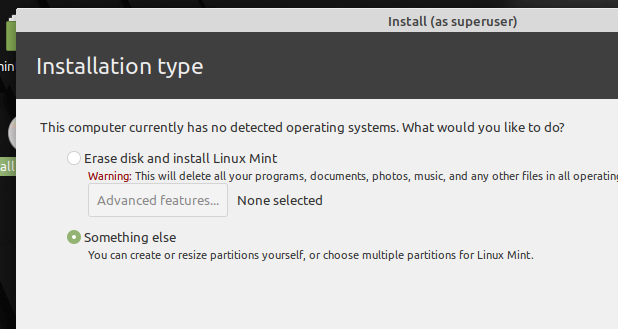 Next, select the /dev/mapper/efilvm-root logical partition we created earlier, click the “Change” button and set is up as an EXT4 volume for root “/”. 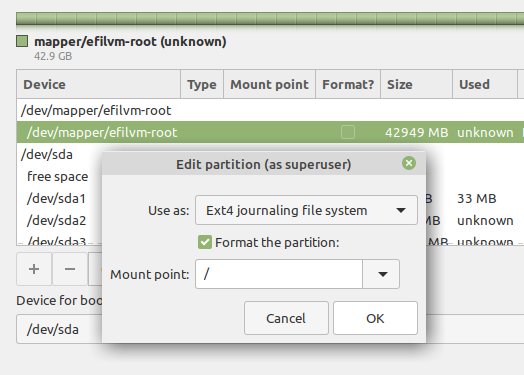 Afterwards make sure settings are set up correctly for the other partitions:

After the installation is complete, load into the OS and verify the results in the “Drives” system app.

Here are our physical partitions: 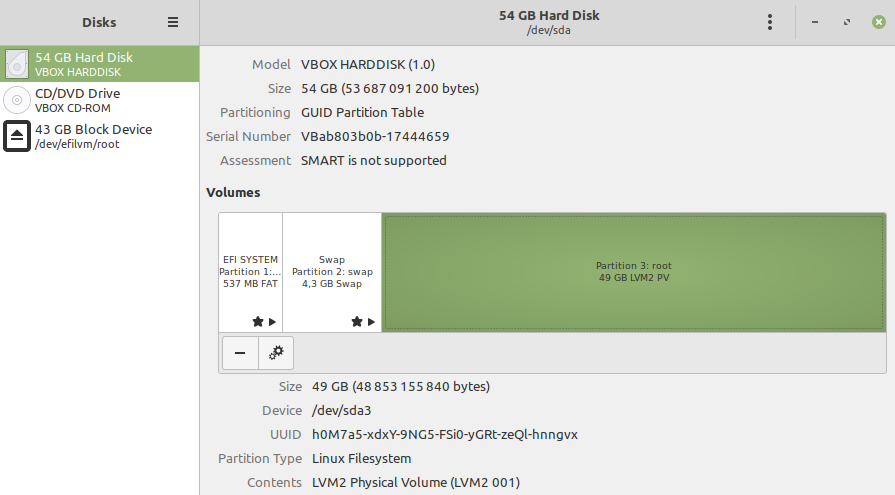 And here's our LVM group with a single logical volume /dev/efilvm/root:

Now set up your backups!

I won’t elaborate on all possible ways one would backup their Linux systems, because I opted for a simple yet effective approach of using FSArchiver with the help of a handy shell script. Simply create a backup.sh file, navigate to the directory with it in the terminal and execute as root. Like this:

Reposting the contents of the backup.sh file here with slight changes just in case.

For me this a good enough solution, but you might want to look into something with native scheduling capabilities and maybe a graphical interface. There are loads of articles on the topic, you may want to start with this one.

With all that, I congratulate you on a good job securing your data and wish you luck to never end up needing the backups you create!