Time is a priceless non-renewable resource so it makes sense for the brain to value certain activities, products, technologies and media above others to best spend it, and get the most "return value". Be it new skills, good laughs or anything in between — ultimately there's always information that a particular individual will be interested in receiving more than the other.

Therefore an individual develops critical thinking skills which are then used to asses all aspects of their lives and the lives of others. The better the skills and the decisions made, the better of the individual will fair in the end.

To asses something effectively the brain needs to know both beneficial and detrimental qualities of what's being inspected.

In case of YouTube — it's the videos and their public reception. And up to this point the platform used to be a prime source of both videos and the quality "metadata" on them.

Recently this changed and unfortunately a lot of what made YouTube so special and valuable is now lost.

Here's a good brief video on the topic:

Objective, General Population-Rated Information en Masse (For The Most Part)

YouTube, regardless of all the controversial changes over the years, had always remained a valuable source of critically assessed information.

Think about it. All of those likes and dislikes are feedback. There's no social research lab on the planet that could afford such vast amounts of general public polls and assessments of media products, let alone for free. If you think "Eh, it's just another platform, who cares?" — allow me to retort by reminding you that:

The last bullet point is especially showing. A lot of younger people use YouTube as their main media platform. YouTube has become an important part of almost a full half of individuals on the planet.

Whether you like it or not, it affects the development and the preferences of every other person on the Globe. And it used to provide more or less reliable critically assessed information on any topic.

And now with the removal of the public "dislikes" counter the "metadata" on each and every video lacks credibility. Sure, you can see the likes counter, but... What is it good for if you can't really put in against the whole data on how other viewers chose to interact with the video?

Here's my recent experience with this: due to the gradual approach to the global policy change, on the two machines I own, one already has dislikes removed while the other one — still displays them.

In the 3 days I've been using YouTube to watch all kinds of videos I noticed that when I would open a new and previously unwatched video on the device that had the negative feedback hidden, I would almost instinctively stop, copy the URI of the video and re-open it on my other machine. I need to know what I'm getting into!

Without any negative feedback I have no idea whether this particular video is a fact or a hoax, a quality tutorial or a quick ad revenue grab... Dislikes balance the likes, they provide the critical results of an ongoing "critical assessment", which is what my brain absolutely loves and will pretty much only trust information when provided in such a way, with opinions from the both sides: the supporters and the opposition.

For me, even if a certain video that, say, covers beliefs and standards, has a noticeable amount of dislikes, — it doesn't necessarily mean the video or the author are wrong. Such critical assessment results prepare me to think and not immediately and impulsively react to what I might hear or see in the vid. Maybe the speaker has a point? Maybe the ratio, once again being a result of an extensive public critical evaluation correlates to some real-life criteria or an event that has very polarized views? It's important to know that the world isn't all sunshine and butterflies and that not everyone agrees with your beliefs.

I have a theory why it's now specifically that YouTube decided to ditch the public dislikes counter and try to clumsily promote this move as a good idea. But. It's. Just. A theory. It. Has. Nothing. To. Do. With. Trying. To. Hide. The. Truth. And. The. Negative. Feedback. That. Hurts. Sales. Or. Promotion. Of. Certain. Ideologies.

Just a theory, of course. Still, now it doesn't really matter why they are doing this, since it's already been decided and confirmed as an upcoming change.

Not With a Bang but With a Whimper

Let history and the future generations know, how the amazing freedom and convenience of getting reliable information on the web began its decline — not with a bang, but with a whimper in the form of a video by Youtube's own "Youtube Creators" channel.

In a week since its publication it saw its own share of critical evaluation and you can roughly guess the overall consensus: 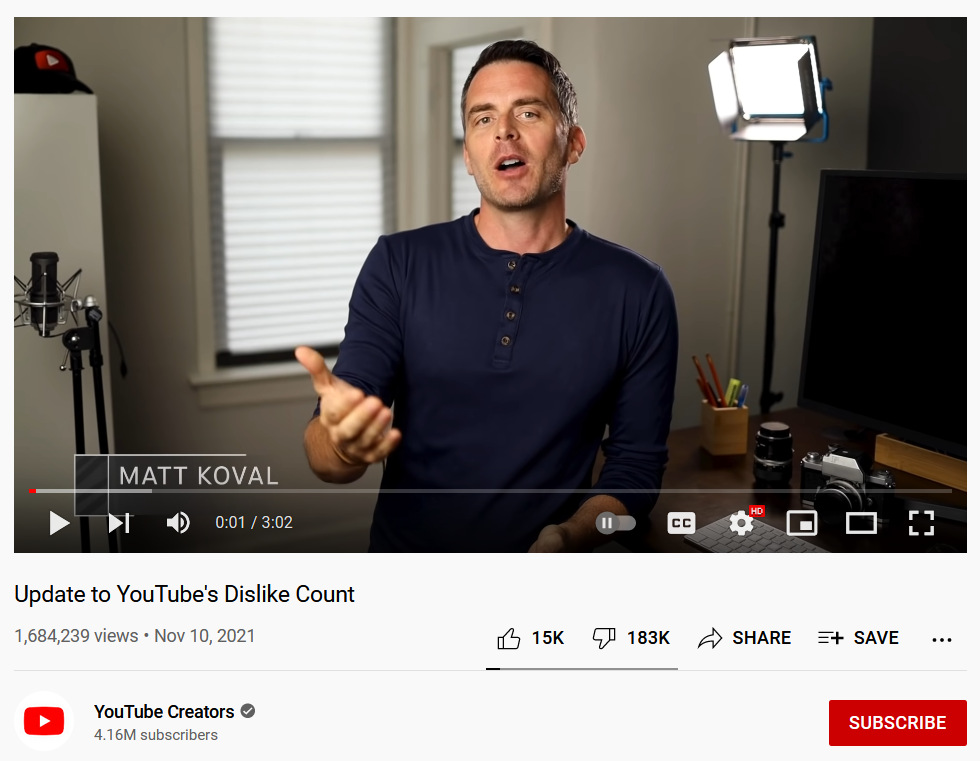 Now take a look at the same page, the same video, viewed on the same day, except without a public dislike counter: 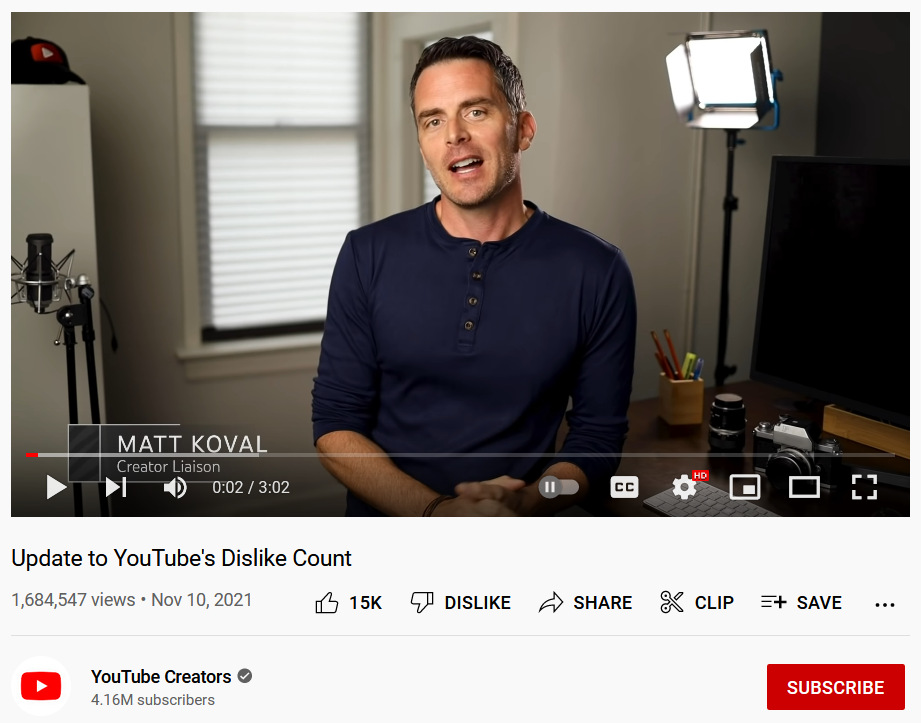 Notice how much less credibility the video and the creator have now?

Don't you feel the confusion?

Note how much ambiguity and lack of trust to the information being presented comes with a simple fact that the collective opinion on it is skewed and/or incomplete?

Such a situation is a perfect breeding ground for the development of biases. And biases kill discussion. They kill objective truth and they kill credibility.

Luckily, comments under videos are still a thing, so one can technically still try to assess the opinion of the public on the credibility of the video before watching it... As long as those comments are not hidden. Or heavily moderated either by YouTube or the creator. Or not overwhelmed by bots and spam accounts. Or you have the time to sift though tens or hundreds of comments. — So much trouble just to compensate for a simple number next to an icon!

YouTube went from being a rare example of a platform with massive amounts of credible critically assessed information to a source of doubt, confusion and dubious data. And it did so under questionable pretenses and with pathetic nonsensical excuses.

What a way to go.