Basic muscle using a cage or an envelope

Alas, Softimage doesn't provide a ready-to-use muscle system off the shelf. The good news is that any object can be cage-deformed or skinned to any other object in Softimage, so creating "muscles" would be as simple as placing spheres and capsules around the rig, parenting or constraining them to bones and adding a cage deformer on top of a skin envelope. Then all you do is animate the shapes of those muscles based on bone position or rotation.

You can then take it further and add a dynamic jiggle to your muscle objects using ICE Verlet Integration. 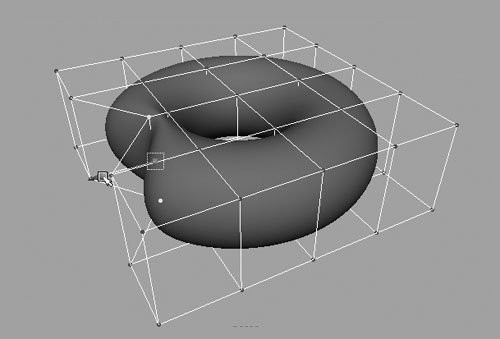 What it doesn't help with, however, is simulating collisions between the muscles and the skin. Muscles deform upon collision in real life. Since they also have skin attached to them you get skin collision management "for free". So we need to find a way to collide those muscles on our character rigs.

Those familiar with Softimage ICE would say: "Just use ICE to do this". Unfortunately I'm no Technical Director and my knowledge of ICE is limited. It would take me quite a while to build an ICE-tree that would manage collisions between objects as Maya muscle does. Hell, even if you look through Softimage ICE sample scenes the only solution that comes close to doing this is the Bi-directional mesh-to-mesh deformation or dent, but it doesn't use normals to calculate point positions and requires you to explicitly specify axes which you need the object to deform along. 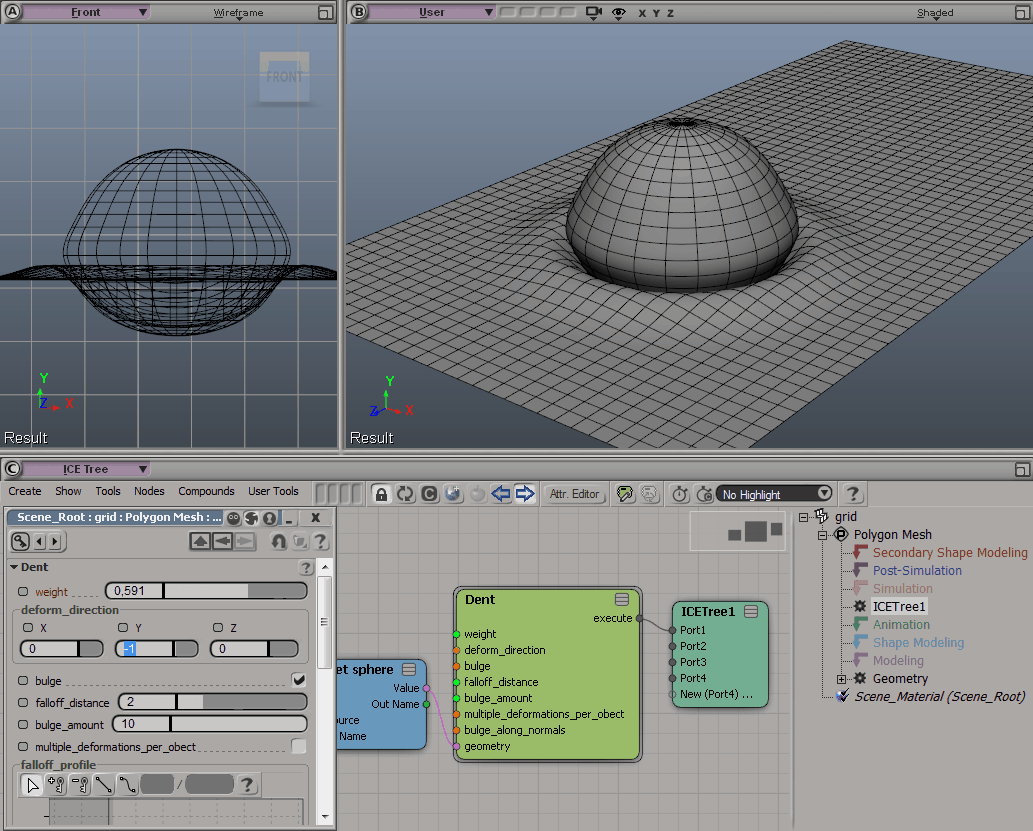 I do believe that with the help of Verlet Integration it could be possible, but recreating something as complex as Maya's muscle collision system with ICE or Fabric Engine is a project in itself and just not an option in my case.

After a bit of digging I did discover a free ICE-powered muscle system called VorleX Muscle available for Softimage. Tried it out and as powerful as it was, the only type of collision it supported was unidirectional muscle object deformation where collider objects didn't deform – only the muscle did. So no muscle-to-muscle deformations here either...

Another way of achieving artist-directed collision is adding soft-body dynamics simulation on top on an existing object animation which, believe it or not, is perfectly possible in Softimage if you're willing to bite the bullet and use the legacy simulation tool-set. There's an article on the Softimage wiki explaining how it can be done.

This method has some serious drawbacks though:

To sum up: I tried this method and failed miserably. Not going to touch XSI legacy simulation system ever again.

Well... When everything else fails, as a last resort you can always sculpt blend shapes and interpolate between them, but this is tedious and requires a bit of scripting. Besides, you would have to do it for each character separately. If you have a team of artists it's fine. But if you're alone and have a deadline looming in the distance or simply can't afford to dedicate too much time for the project, it turns ugly.

After all of those failed attempts I thought to myself: if creating object-to-object deformations is so complicated and sculpting blend shapes is so time-consuming, why not look for the other way? Like something that would do this for you automatically (more or less) and still produce a descent result.

I got to work and after a series of experiments finally managed to develop a method that allowed to create somewhat believable skin collisions for animation and was very easy to setup and use - a combination of Cloth simulation and a Delta Mush deformer.

Idea of using cloth simulation for skin is anything but new. Syflex devs posted a tutorial on how to do this over a decade ago. 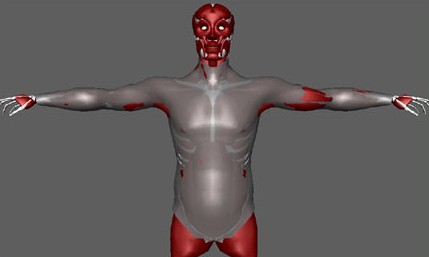 What they didn't cover in the tutorial though was self-collisions simply because when used this way they would in many cases cause serious simulation flickering on collider intersections. 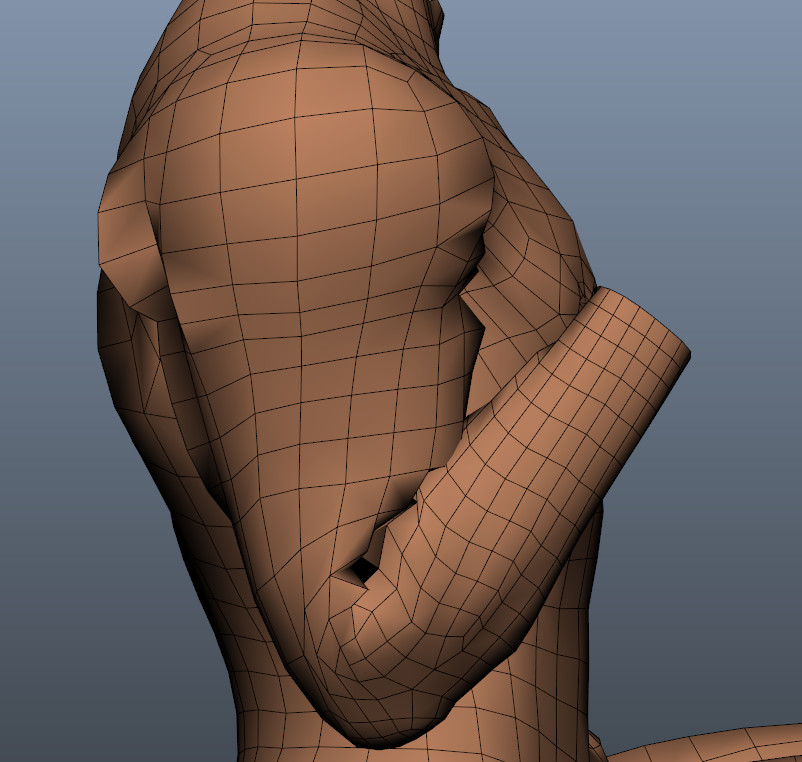 You could of course fix this with a basic Smooth deformer, but the amount of smoothing required to ease those surface flickers out would completely destroy any if not all surface detail on your mesh.

Luckily for us in 2014 guys from Rhythm & Hues Studios presented their proprietary deformer at Siggraph 2014. They called it "Delta Mush".

This is how it works in a nutshell: local mesh detail (per point offsets from a smoothed to the original undeformed mesh) is precomputed and stored. Then the "to-be-fixed-deformer" is applied, directly after which the mesh is smoothed again with the same smoothing algorithm. This removes newly introduced detail which could potentially include unwanted artifacts from the deformer. Finally, the stored offsets are applied, restoring the original detail.

You can get the paper here.

And here's the presentation:

As you can see, this is exactly what we need to correct simulation flickering (they actually show it in the video above. Shocking!)

Even luckier is the fact that there's not one, but two Delta Mush implementations for Softimage! One by Miquel Campos - a purely ICE-powered set of compounds - and Guillaume Baratte's C++ implementation that is much faster and allows attenuation of the effect by a weightmap. Thanks guys!

Another piece of good news is that Syflex cloth simulation engine that is integrated into Softimage is programmed in a such way that when cloth gets caught between two objects it can still try to avoid self-intersections if you achieve the right balance between the values of the friction of the colliding objects (base envelope, for example) and the one on the self-collision node on the cloth skin. Those are just force nodes after all. 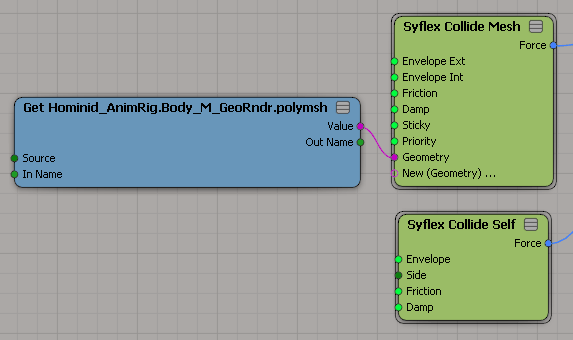 Armed with these powerful tools I set out to experiment and after a series of attempts managed to more or less achieve what I longed for: automated full-body-ready self-collision handling for soft-tissue envelopes.

Granted, the result is not perfect (as most automated things are in the world of 3D), but it's fast to set up and chances are that viewers won't even notice that collisions aren't physically correct in the animation. Hell, you can almost get away with having a simple quaternion envelope without corrective shapes as a base for the simulation as long as you don't approach extreme bone angles. This way you won't have to mess with muscles or corrective blend shapes for envelope collisions, which is good news especially when working on background characters.

This method has not been production-tested yet, but when the time comes I will definitely integrate it into my character pipeline and share the results.

The method is both good and bad as are most things in life. 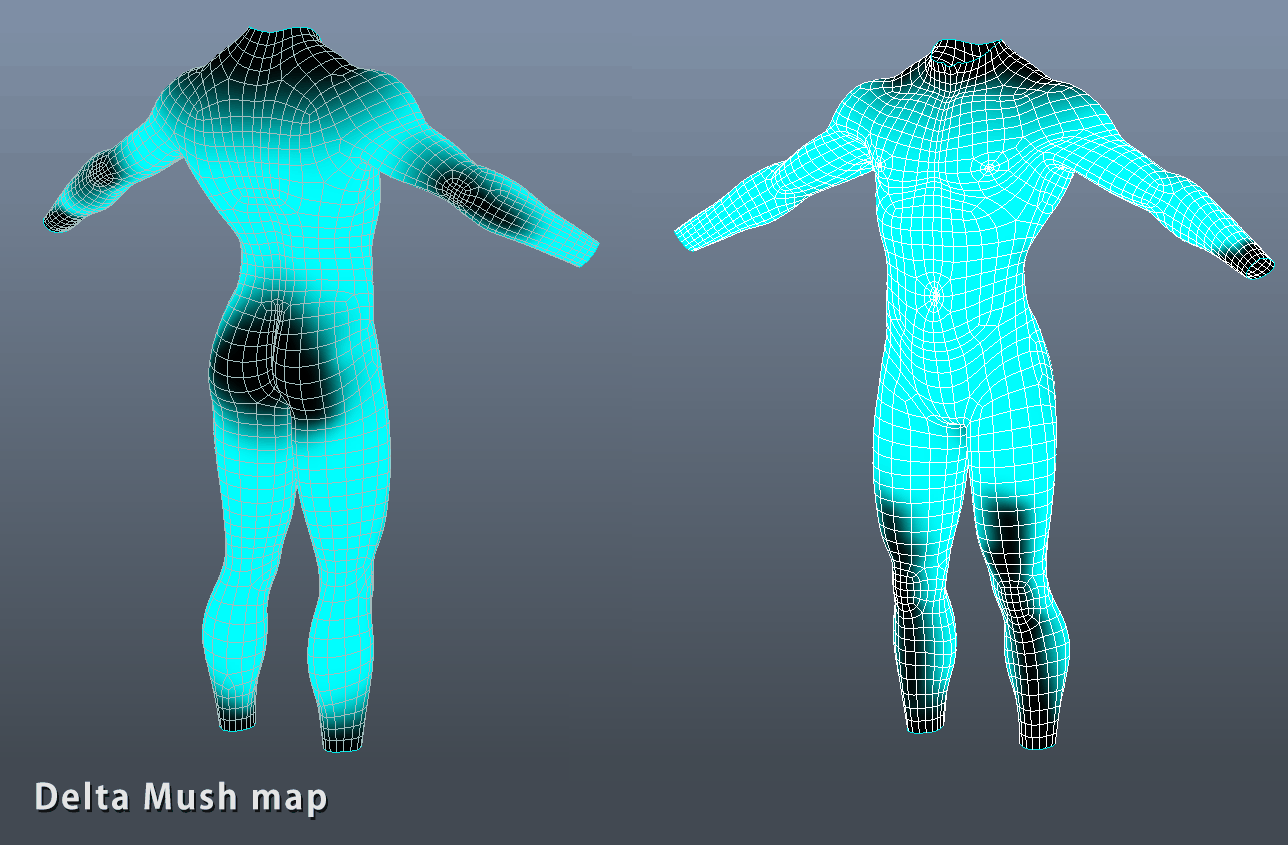 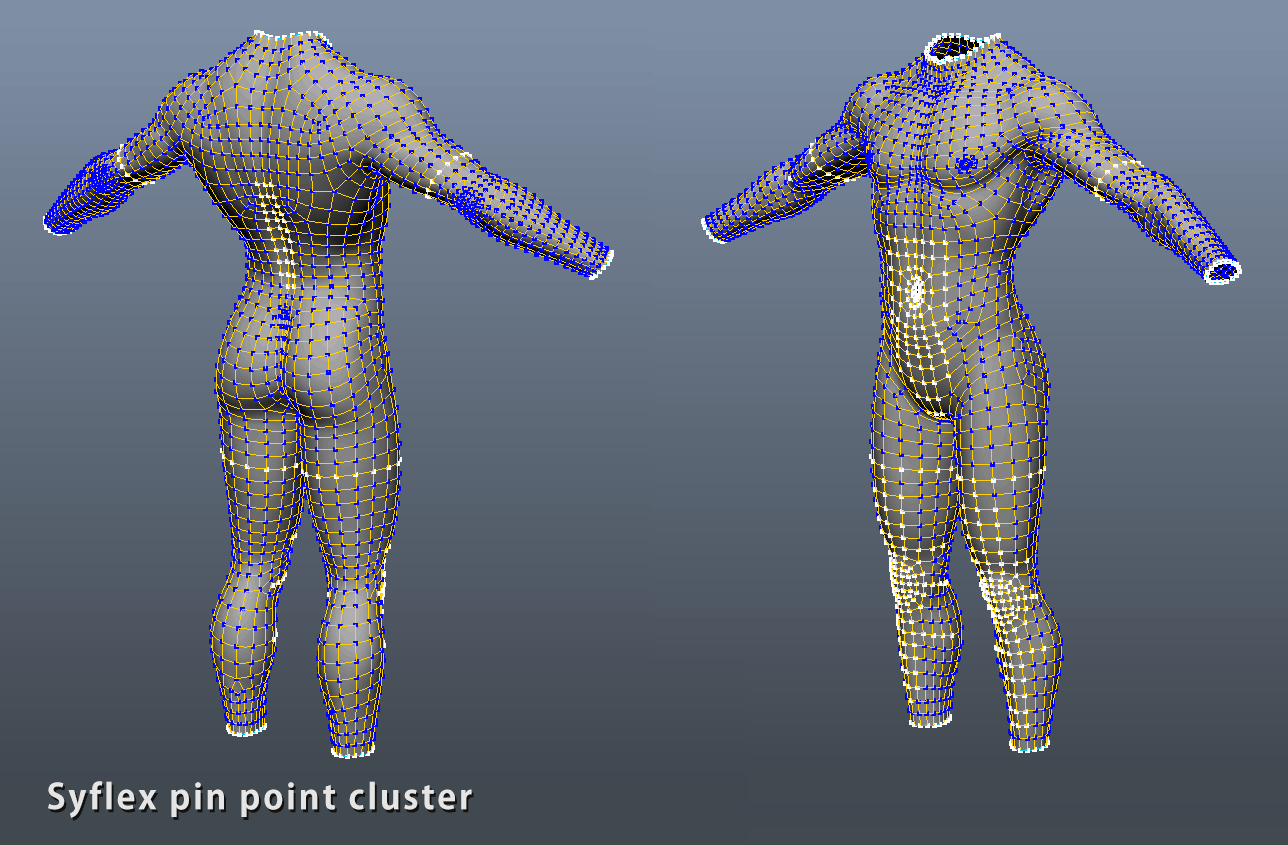 For the moment I'm happy with the results and will move on to other tasks and studies which should ultimately lead to the creation of a finished animated piece.

What do you think of this method? Any advice or criticism would be appreciated.