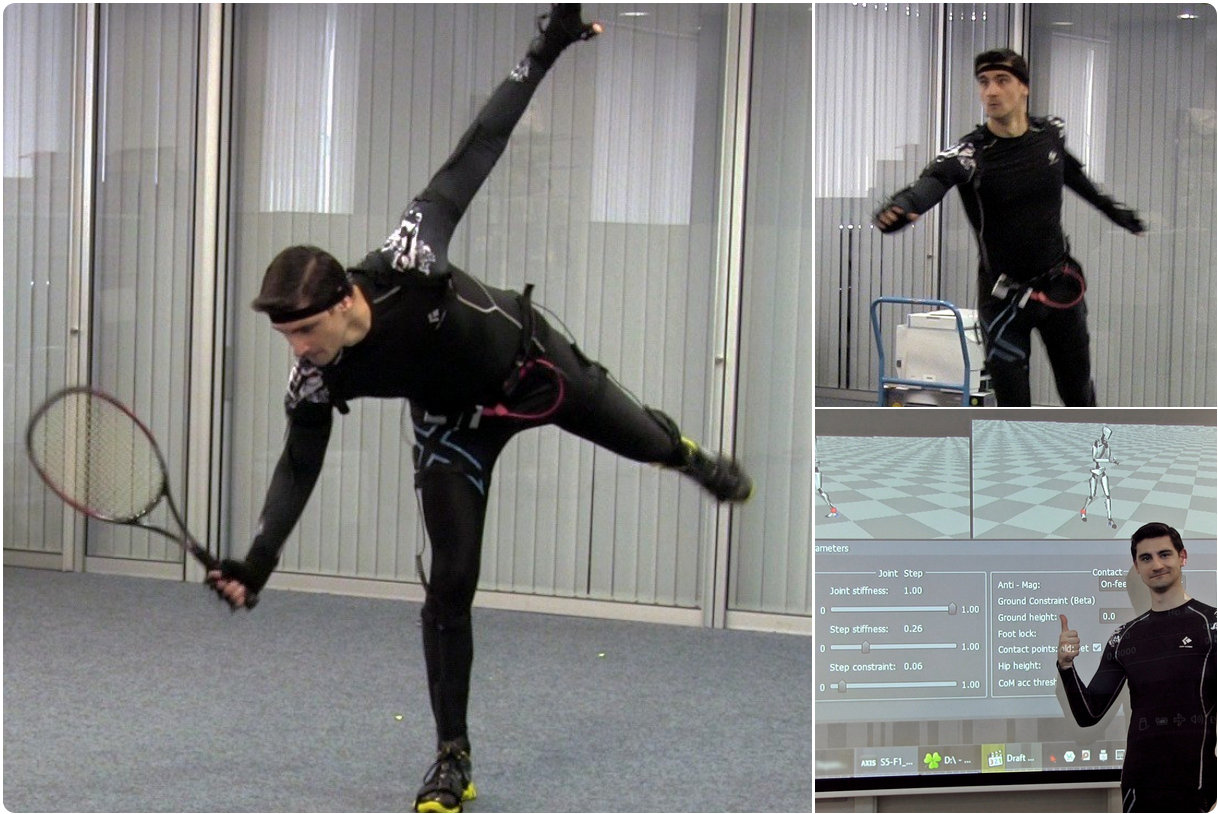 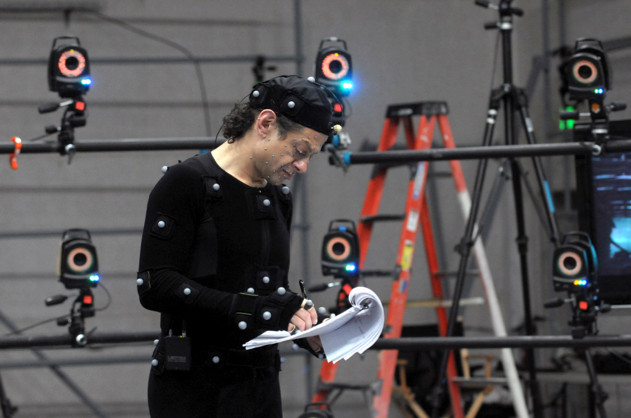 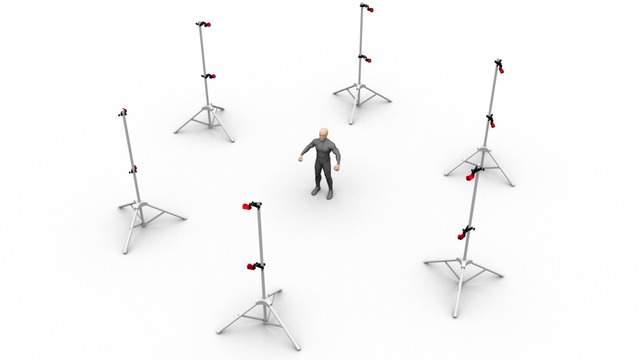 Note how the actor is surrounded by cameras. The more cameras – the better, since as you can guess, body parts can shadow each other, this can make markers invisible to several (if not all) cameras, which in turn means no data.

Obviously, optical MoCap system recording volume can be quite limited: 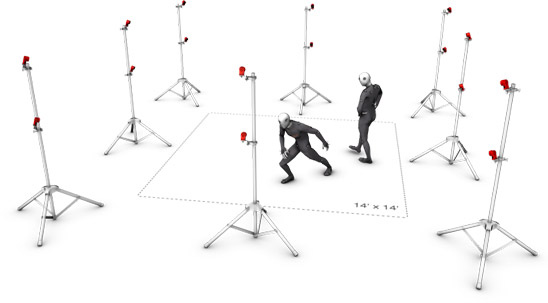 Which is why large studios build huge rigs and use top-quality 4K-cameras to capture markers in larger volumes: 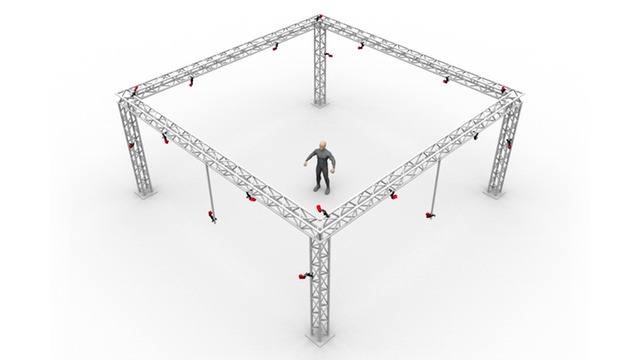 Initially I was actually planning to go the "optical way". Considering that Optitrack cameras and rigs were (to put it mildly) not very affordable for an amateur, I turned to the iPi Soft Motion Capture software suite which could utilize consumer-grade cameras to do just that, and capture motion without markers (believe it or not). It looked promising and I ended up purchasing several PS Eye cameras (as recommended by iPi devs), tripods, cables to try and capture a clip.

Setting up the cameras and calibrating the recording volume was pretty straightforward, albeit quite lengthy and full of frustrating issues related to both the software and the gear (especially considering that each camera would have to be connected to a full-speed USB port, not a hub/splitter, preferably - 2 cameras maximum per USB controller with a quality USB-cable with minimal power loss, good shielding e.t.c, e.t.c...)

Just trust me, it was not fun. 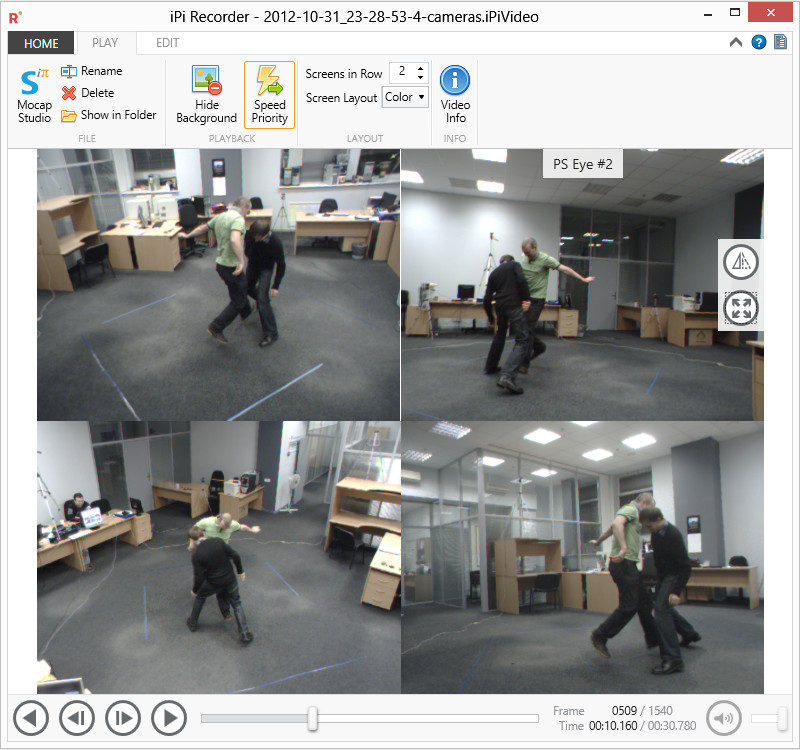 Wow, I forgot that I actually used to dress my puppets up in some sick drag!

As soon as I was done with this single clip I quickly realized that guerilla optical MoCap meant trouble: you need to properly set up the cameras, have lots of actual physical space, space on your hard drive to store high-FPS captures from all cameras, quite a bit of time to set up the rig, calibrate the cameras and mark out the capture volume and so on and so on... Add special lighting conditions (that is - bright and uniform enough) and you'll get the basic gist of what I'm talking about.

As I already mentioned in my previous blog post, Preception Neuron is an affordable IMU MoCap system. It's a very versatile solution since with the smallest set-up possible you only need to be in a relatively magnetic-free environment and have a USB powerbank to power up the HUB and the sensors to be able to capture animation. Even the use of a computer and a Wi-Fi router is in fact optional since the HUB that comes with the kit supports standalone operation, including calibration and recording, while capturing clips directly to an SD-card. 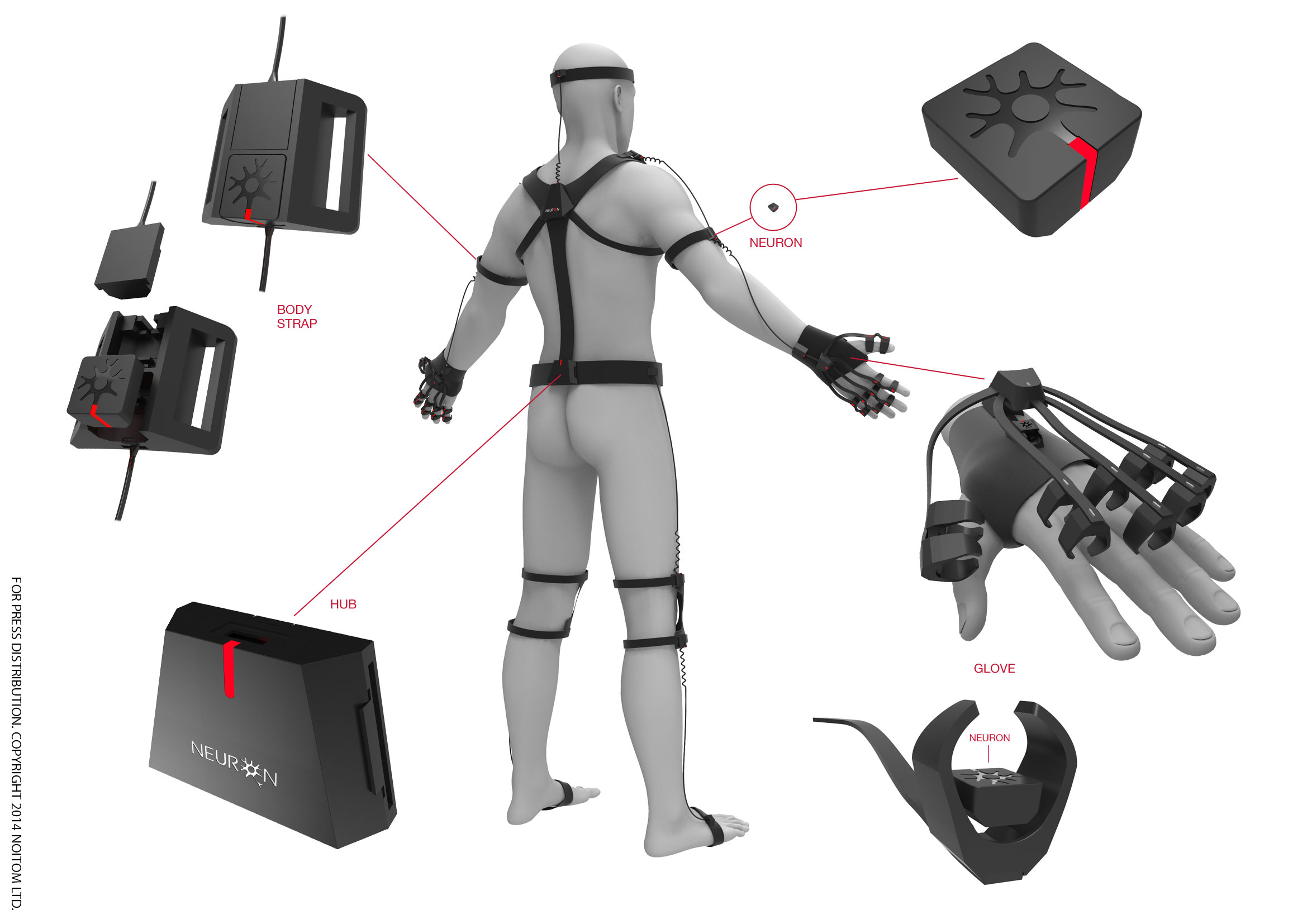 It's all fine and Dandy, but what does the use of "IMUs (Inertial Measurement Units)" mean when in comes to motion capture? 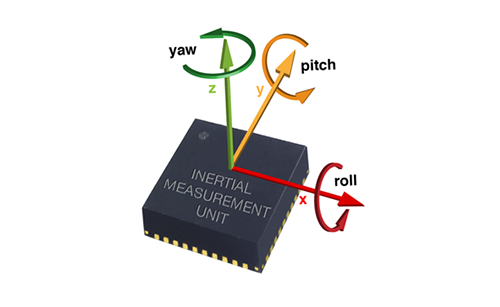 This is a vitally important difference between inertial and optical systems you need to clearly understand before going IMU: in the world of a sensor that does acceleration, force and direction there's no such thing as absolute positional data. What this means is an IMU-based MoCap system has to have a fulcrum (or a pivot/foothold/contact point - the point on which a system rests or is supported and on which it pivots) in order to be able to calculate the difference in absolute positioning of the whole system and not just angular data from the sensors. To put it simply - you need something to support the actor when he or she moves if you want to receive positional data on how the actor (or the whole MoCap system) moves in the scene and even then the data you'll receive will not be 100% precise. This is the main reason all those fancy new HMDs and headsets still use optical tracking to reliably track the wearer in 3D space.

In case of Perception Neuron you can use the AXIS Software suite with the following options to specify the contact point mode:

Feet (the mode you will probably be using most of the time): 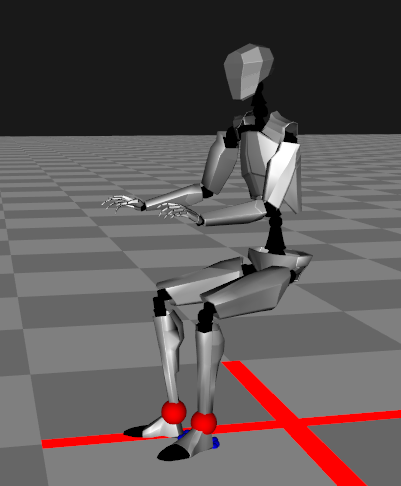 Hands (where the whole rig moves in relation to the detected hands contact like when hand walking or hanging on something): 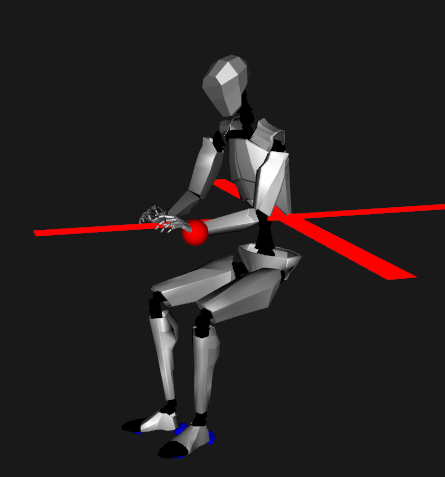 Hip (the actor is actually hovering above the floor while the hip is kept pinned in space): 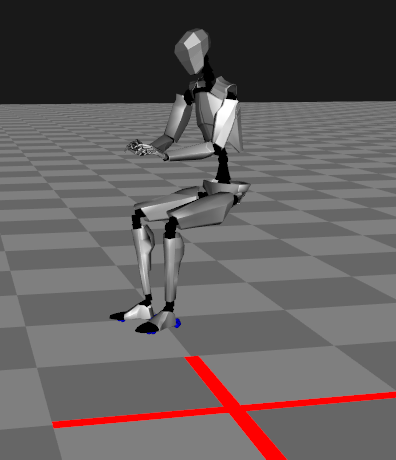 Body size is also quite important for an IMU system because it determines how far the sensors are apart from each other, although based on my experience you can always change body dimensions after recording (the manual doesn't favor this option, but it's still there and works fine): 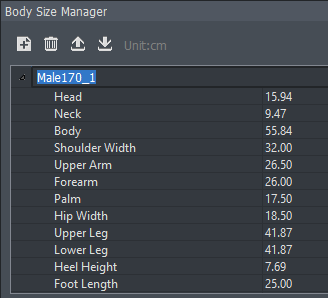 It's pretty awesome to see the software figure out contact points of a walking or jumping character. Remember that to move in space in an IMU suit you need to always have a fulcrum. Since during a walk your pivot alternates based on the foot that is in contact with the floor, the same principal is used to determine how the IMU system moves in space. Even more impressive is what happens when both feet leave the floor during a jump, for example.

When jumping the software uses data from the sensors to propel the system in the direction of the jump and corrects the vector on the go with as much precision as the sensors can give. At some point the jump must end on with one of feet landing on a surface and this is when the movement is stopped and the whole system gets constrained on Y-axis:

Preparing for a jump. Note the red contact point indicator on the foot and the initial position of the actor 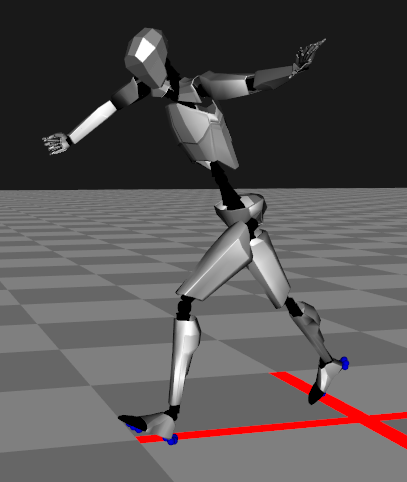 Jumping forwards. The actor is moving in space based on the initial acceleration vector, which changes over time. Note the absence of a foot contact correctly detected by the sorftware 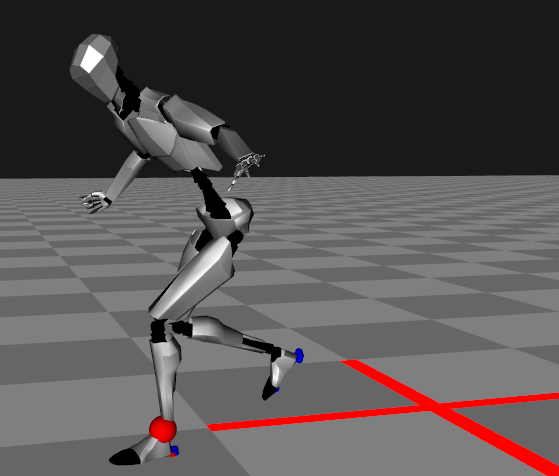 Landing. Note a new contact point detected on the left foot and that the actor has actually moved from the initial position

Think before you buy

Keeping all of the above in mind, you can make a decision whether an IMU MoCap system is right for you or if you can make any use out of it at all considering all pros and cons of such a solution.

As you can see, IMU systems are by no means perfect and come with numerous limitations you should always be aware of.

I need to elaborate on the cost of the system and why I finally decided to go IMU. You see, where I live, optical MoCap volume, software and hardware rent can set you back about 800-1600 USD per day (8-10 hours), excluding actor and processing fee. I knew from the beginning that I'd need at least two days to capture all 170+ takes, which would mean I'd have to be ready to shell out over $1600-3200 and be really damn sure I wouldn't miss a single action during capture days since recording additional takes "on demand" would be out of the question.

So would I call PN Kits truly affordable MoCap solutions for the masses? Abso-freaking-lutely! There's nothing that can even come close to what you can do with Perception Neuron for the price. Add great support, stable software and reliable operation and you have the best IMU MoCap kit on the market.

Even though I am a complete amateur when it comes to CGI, I am still above all an experienced project manager, so I made the following table which I then printed out and used during recording sessions:

Nothing particularly special, but boy does it help assess the full scale of the project and plan both capture sessions and, later, – retargeting and other actor performance and animation-related tasks.

I won't go in-depth here, since everyone has his or her own routines for working with MoCap, but here's what I had to do to capture and export each action source (that is - motion capture recording) for animation reference and re-targeting in my DCC:

Frankly I didn't expect it to be so time-consuming, but most of the steps are similar for all captures, so I was able to rather quickly process all takes up to the 8-th step, so all that is left is to actually make use of all of those captures in the scenes of the film which I've already started doing and it's going well.

It's a long way to go

If you think that directing , capturing, processing, re-targeting, correcting 170+ MoCap actions is quite a formidable task, you're 100% correct. Still, I got myself into this mess and I'll be the one to get though it and, hopefully, make it look good in the end.

Only time will tell.